Well, this is topical, as I had one today. My first thought when I bit it was 'am I eating the foil ?' cos that seems to happen to me often.

Trust Carys to be first here, chocolate face. I love them I just dare not bite one, I'm afraid of breaking my teeth but there are ways around this, where there is a will there is a way.

I nearly bought one the other day, but didn't. When I have had one I always want another. But I have to control myself.

So, just to make sure, we're talking about their "Creme Eggs" here, right? The ones that, when you break them open, look like a raw egg?

Yep they are the ones, yummy,

they are not as good as they used to be though, they used to be less sweet and more runny. I lied as well, not on purpose but I had some miniature cream eggs yesterday, my neighbour bought them for me. She also gave me a date and walnut loaf, more yummy, and some cornflake chocholate crunchies with 2 little eggs on the top.

Oh and by the way I don't want the galaxy cream eggs or any other kind it has to be the ones you are talking about.
J

I Haven't had one in years (I'm just too revolted by the "raw" egg thing), so I think I probably haven't had one since they changed them, as I remember them being pretty runny. Which was a big part of why I found them so revolting.

But I do remember them being almost sickeningly sweet.

I guess that's why I'd much prefer just a plain, high quality, chocolate bar. Break off a piece, pop it in my mouth, and just let it melt.

I love them I just dare not bite one, I'm afraid of breaking my teeth but there are ways around this, where there is a will there is a way.
Click to expand...

Too right....I have developed a technique involving biting with my molars and pre-molars as I am scared of breaking my front crowns. This often results in chocolcate smeared about your face, but, hey ho, such is life.

I lied as well, not on purpose but I had some miniature cream eggs yesterday
Click to expand...

Jaylah, its not raw egg its a cooked egg but runny, because it is white and not clear. Do you know, until you mentioned about the inside of an egg issue, and being repulsed by it I'd not thought of it that way. I had distanced myself from the concept. They are quite thick now though !
J

Oh, I know they aren't actually raw eggs inside. They're sweet stuff that's just designed to look like a raw egg.

Which, to me, is actually almost worse!

This has the potential to get out of hand, we start these threads and they end up in up roar. Now who is calling for a moderator, I say touche' I didn't lie on purpose either I forgot I had had them, and talking about them brought back the memory. Mmmmmmmmmmmmmmmmmmmmmmmm

They are much thicker now and I wish they weren't, Oh have you tried the Mcdonalds cream egg ice cream, if not try one they are lovely better than the eggs, they are just like the eggs but you get ice cream as well. Extra yummy

Hmmmmmmmmm, well, the last one I had was sort of halfway between clear and white.

I mean, you break open the outer shell, and this sweet, liquidy stuff, some of it "white" and some yellow, comes running out. (Although you're saying they're thicker now...which is probably a good thing as they were awfully messy to eat when they were so runny.)

Perhaps it was meant to look like a very soft boiled egg? 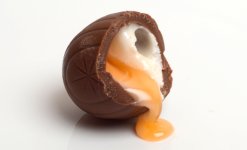 I dunno. When I broke them open, they just always looked like raw egg to me. And I never understood why anyone would want to eat something that looked like a raw egg. Or even, for that matter, a very soft boiled egg.

But, the other part is that the inside part is too, too, too sicky sweet for me.

Jaylah that picture is making my mouth water.

Carys where do you shop I haven't seen that, it's probably a good thing, this really is the wrong forum to be discussing chocolate and dribbling all over the place, and we wonder why we have to go to the dentist and get filings etc... no brainer really after reading all this, I don't eat a lot of chocolate though, but this is all making me want some.
J

But then there are so many studies that have come out about how eating small amounts of dark chocolate each day is actually good for you.

So I buy a good-quality, dark-as-I-can-find-it, chocolate bar every so often, and then I break off ONE square of it. I put it in my mouth and let it totally dissolve on it's own each evening. And once it's completely gone, then I go in and plaque-rinse, brush, interdental brush, WaterPik, and mouthwash.

And I refuse to feel guilty about doing it.

(I have a petite Princess -- Chloë -- insisting I stop typing and hold her.)

And quite right too, give her a cuddle. I couldn't buy chocolate in because I still cannot leave it if it is there. I am not bothered if I see it in the shops, but can't stand it calling for me from the fridge. I just have to eat it until it is gone. As I type there is an advert on the TV advertising chocolate.

One square of dark chocolate, and you refuse to feel guilty....

What about a spoon dipped in the cake mixture when you are baking, that is yummy too. Trouble I get a bit carried away and then feel sick, when I do that.

Ummmm, well, it was last year, it was a limit edition cadbury's ice cream, can't remember which super market I got it in...as I'm not loyal to one in particular....I'll go search now


are we the only three people who have an opinion on Creme eggs ?

carole said:
What about a spoon dipped in the cake mixture when you are baking, that is yummy too. Trouble I get a bit carried away and then feel sick, when I do that.
Click to expand...

Or chocolate chip cookie dough. That's my downfall and, yes, I do it until I feel sick.