Do I need my 1st Crown? Or can I get another Silver Filling or My 1st Onlay

Until now, the worst I needed was sone big silver fillings. I went last week to the dentist to check out a big 12-year old silver filling on m bottom molar which tasted metallic near the tongue-edge, and was told there was some leakage, but because it's a deep filling, he recommends coming back to have a piece drilled off, and some more silver packed into the hole. He was fully booked for the next 2 weeks, so I went to another dentist to do it in the meantime, but this one recommended a crown-even though the filling is only one-surface, and said the tooth does not have much enamel left (my old dentist actually this drilled this tooth without numbing it, and said the hole was bigger than he thought it would be) and that my current silver filling is sitting on top of a nerve. When I asked if he could request an onlay from insurance instead of a crown, he said the tooth would still be weak with an onlay. I told him to hold off requesting crown coverage while I look into it. I've never had more than a filling until now, and don't want my tooth ground down to a peg if it is not needed. Should I go back to the 1st dentist and get more silver added to this tooth to seal the leak? Or should I get a crown or an onlay (gold or white)? Most of the tooth seems to remain, and I just have a big chewing-surface filling. See pictures below. 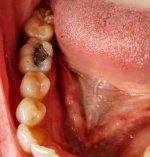 Re: Do I need my 1st Crown? Or can I get another Silver Filling or My 1st Onlay

based on limited information I would only crown that tooth if it was cracked.
You must log in or register to reply here.

B
Apicoectomy: Do i really need one/what alternative(s) are there