Hi, Just want to ask any dentist about another very painful tooth this time please?

It's the same as my upper first molar on the left hand side. Well this is it's twin on the upper right side, now beginning to cause problems! I've just finished my third course of antibiotics (always 'Metronidazole'), this one was 400mg over seven days! But the pain and sensitivity haven't been touched or helped at all. Whether that's down to my stubborn dentist refusing to even try any penicillins, as I'm unable to stomach some of them (Amoxicillin for one), or if it's the tooth beginning to cause more pain than ever before? I have no idea.

The tooth is beginning to feel like the first one did and I don't know if it still has much life in it, or whether it's about to split in two, too. (I am still getting pain, due to cold or hot food and drinks, though not as bad as before the RC). I was hoping that maybe (as they've both been root-canalled), this one could either be redone, or have one of those apicoectomies, that I hear so much about? With all the trouble caused by the extraction of the last one, I REALLY don't want this one extracted if at all possible, as at 11 weeks post extraction, the gap left by the one on the left has proven to be almost impossible to get used to! (pain in tongue and occasional nauseous feelings). 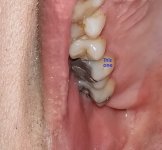 I've had real trouble trying to get a photo of my teeth, but was lucky tonight with the one I'm uploading for you to see whether there's any hope for a second root canal? The tooth just looks completely flat and it feels like a flat piece of chewing gum to me, with not much resemblance to a normal tooth anymore, though I really, definitely don't want to lose it. I wouldn't mind so much, if I could have an immediate temporary partial denture fitted, to fill the gaps left by both upper first molars. Could that be a possibility? Or are all the dental technicians still closed at the moment?

Many thanks to you!

Need to see an x-ray to see if there was any scope for a re-root treatment to work, it doesn't look promising from that photo, looks like there may be a crack in it...

Re-RCT on molars is a bit of a long shot on a good day and really needs a specialist with a microscope to have any good chance of success. Apicectomy is very tricky due to multiple roots and close proximity to the maxillary sinus.

I don't know what's happening with technicians, presumably your dentist will know about their own one.
G

Thanks Gordon! Well my dentist won't even see or talk to me, until they officially reopen! Hopefully no later than 4th. July or whatever the latest estimated date is. Then I'll have to wait until they've seen all their 'normal' patients first, who need treatment and I should think that's a lot! Maybe then I can have my 'new patient' appointment and see if they can then help me at all at the appointment after that. IF my broken tooth holds out that long? Probably be most of the summer gone by then. Just hope it doesn't split right down the middle, like the last one did.

Fingers crossed for you then, which is about all I can do from here