I should probably start by explaining that I have always a mild dental phobia (gums specifically) and I am terrified of losing any teeth due to gum recession. I now wake up with this fear, think about it any time I look in the mirror and fall asleep with the anxiety of it. Having seen a hygienist 3 months ago where I burst out crying as the deep clean seem to promote bleeding in every part of my mouth and as the hygienist was measuring the gum recession so we can keep an eye on it she was calling out a number followed by the word 'bleeding' on every tooth. This process almost tiggered a panic attack in the chair. Since then I have given up smoking (because I am paralysed by this fear) I have religiously been using tepe brushes combined with flossing always used an electric toothbrush anyway. I now seem to have developed black triangles in three areas of my top from teeth which I think are unsightly, and I am terrified the tepe brushes are making them more pronounced. I look in the mirror at them easily 10-15 times per day with fear and it has now got to the point where I am considering removing mirrors from my house as it's all I see and suffered an extreme panic attack lastnight. (hence going and joining this forum) Now that my gum 'issues' are visible at the front my self esteem is affected and I almost don't want to talk to avoid showing my mouth and certainly dont want to eat in public because of it. I am almost getting to the point where I don't want to kiss my partner or smile. My top teeth have always been wonky and leaning to one side and don't align straight with the bridge of my nose. I think I am searching for reassurance and a peaceful heart until I am able to revisit the hygienist.

You have beautiful teeth, don’t worry! I have black triangles in the same places as you, and am learning to embrace them. You still have a gorgeous smile. You could get cosmetic bonding if they are really bothering you, but I think they look fine.
Last edited: Tuesday at 1:24 PM

Your gums look perfectly healthy in those photos. Well done on stopping the smoking. The TePe brushes will not cause black triangles, keep at it. 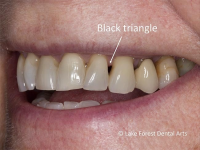 Where an acute infection has destroyed the top of the little papilla between the teeth. As you can see in the photos, yours are completely intact.
I

This is my black triangle, much worse than yours. I hate it, it completely ruins my smile

Ingabella, you have a beautiful set of teeth and gums to my eye but I obviously can completely relate to the feelings you have. We should be kinder to ourselves. Thank you also for bringing such positivity and reassurance to my day, I went for my daily walk with a skip in my step. I don't think my first photos fully capture the black holes so have tried to get them at a better light, you will see in these photos the dark holes are much more pronounced (have only capture two of my three areas) also I am understanding that saliva in them make them less visible, oddly. Learning to not see the black abyss when I look in the mirror.

Hi Gordon, thank you for taking the time to respond to me, words cannot express how much I appreciate it. The photos I previously attached haven't quite captured the holes I mentioned and I understand how difficult it must be for you to analyse from photos alone. I have tried to capture them better this time and so I believe there is some damage to the little papilla you mention, albeit they appear as unsightly holes currently, I (sick to my stomach) fear the black triangles are what these areas will become. Having read about cosmetic bonding, is that something that is better to pursue sooner rather than later or should one wait until it becomes more evident?(even though it's all I see I can appreciate that others might not see it as obvious as I do)

Gordon said:
Your gums look perfectly healthy in those photos. Well done on stopping the smoking. The TePe brushes will not cause black triangles, keep at it.

Black triangles typically look like this:
View attachment 2959
Where an acute infection has destroyed the top of the little papilla between the teeth. As you can see in the photos, yours are completely intact.
Click to expand...

I started feeling exactly like you over the past 5 months. I have the same thing going on with the same fears. It’s a constant worry. Sometime it feels like I can “ suck my cheeks in” if that makes any sense, through my teeth. I never felt that before. Congrats on quitting smoking I’m hoping to soon follow your lead. It’s not easy to do but I know I have too. Big hugs from someone who know how you feel
S

Hi 'Scared all the time', thank you for sharing your time, words and experience. Your description was quite vivid and descriptive and although I haven't had the exact feeling I can totally imagine it and put myself in that place. I have introduced a few things into my life that I am finding helpful, coming on this forum came about after having suffered quite a severe panic attack at the weekend. Being able to talk freely here with people who share the same thoughts and feelings has been really positive because my family think I am mad and I need to sort myself out (they say with love.) Not being someone who looks in the mirror hardly at all, since having developed this 'phobia' as explained I look at my teeth/gums multiple times from early morning to last thing at night. Now I am trying to minimise the frequency and when I do look in the mirror I try really hard to immediately divert my gaze to my eyes and I say to myself 'I love you'. I felt really silly doing it at first, but I actually find the process quite freeing and validating. I don't know where this process came from I just knew I had to start doing something more positive with myself. How I gave up smoking was by not telling anyone or admitting to myself that I was giving up, I took the pressure completely off, I just kept saying I won't have one now and I.let myself snack as much as I wanted for one week only (to get over the first hurdle) and would have a glass of water when I would usually have a cigarette. I did this for two months before I started to tell family, friends and my doctor's that I had given up. I must admit though I haven't had an alcoholic drink since as a glass of wine is not the same without a cigarette (for me at least.)

Hi Gordon, I have tried to take the photos in a better light to get your opinion on the papilla damage we were taking about above. Even after all my trying to comfort myself and reach a place of peace my anxiety this morning has gone through the roof and my nausea is really acute. Please help me find a positive focus.

Thanks, those photos do show things a bit better.
Positive stuff first:
Firstly, it's extremely unlikely that anyone other than a dentist will ever see that or think that there's anything unusual about it and even most dentists won't see it from more than a few feet away.
Second, your gums look in very good shape, the colour looks a nice light pink and there's a good stippled appearance visible in 2 of the shots.
Third, it appears to be mostly related to a slight space between your lateral and central incisor, an easy place to monitor and keep clean, so it's unlikely to get worse.

Slightly negative stuff: there isn't an ideal way to get rid of this, sometimes surgery can build up a new papilla between the teeth but it's very tricky to get right and can often fail leaving a bigger defect.
Bonding some composite or porcelain to the teeth can help disguise it, but longer term these can cause plaque build up and a further retreat of the gingival margins leading to more black triangle.
S

Hi Gordon- thank you for taking a second look. I really appreciate all the positives you put in there. I also had a big cry about there not being anything I can do to remedy the damage currently there and had an early night to shut the anxiety off. I also in the moment had an argument about it with my mother (a trained psychotherapist) who has said that my state of mind and actions are dangerous.

This morning I woke up and I obsessively inspected my mouth (again) and tried to identify all of the areas of individual issues I am having, not just the black holes....but I am making a concious decision today that I have to stop because I am feeling myself getting quite psychologically ill from this whole chapter.

I am doing literally everything I can for better oral care, I can't change my past habits, and I am and always have been more than just my gums. And who knows in the future, there may be some radical cosmetic treatments being developed that will work.

Many thanks for everyone's support, for letting me come into this forum and create a platform to offload, release worry, not be embarrassed by my obsession, seek advice and feel genuine care and support.
You must log in or register to reply here.
Share:
Facebook Twitter Reddit Pinterest Tumblr WhatsApp Email Link