Is there any way to know what to expect?

Hi, for more info you can see this post I made here. But I'll try to sum it up.

After nearly two decades of avoiding the dentist and then ignoring two different toothaches, half of one of my molars broke off. This is what finally pushed me to see a dentist but he only looked at the broken tooth and another tooth that was hurting. He told me the broken tooth could not be saved, but the other one could be saved with a root canal and crown. And that's how my first appointment in years went-- kind of rushed and I left knowing nothing about the rest of my teeth. For years I have had a lot of anxiety about my teeth and what the state of them could be. Even though I've always been terrified of losing teeth, after spending a lot of time looking through this forum, I've been able to make peace with the fact that I'll be losing the broken tooth now. I'm also feeling mostly okay about the root canal. But not knowing anything about the rest of my teeth is making me crazy. I look at them in the mirror multiple times a day. I poke and prod at them and my mind spirals endlessly. The dentist did say he would like to see me for a full exam, but it looks like that probably won't be for a month or so, after I've taken care of the two problem teeth. I don't think I can live that long with this obsessive worrying about my teeth, having no inkling whatsoever of what else may lie ahead for me in my dental journey. When I look at my teeth, nothing major stands out (aside from the two I've mentioned, of course). They seem okay to me and I have no pain anywhere. But I'm still worried that there's major problems going on that I can't see or feel. I know, at best, I'll need multiple fillings and I can handle that. But I worry about needing more root canals or worst of all, more extractions. And it's not just having to endure these things-- money is a big issue too. I worry I'll end up having to spend thousands of dollars.

So I'm posting some photos of my teeth in hopes that someone can give me even the smallest amount of feedback. I'll take anything over being completely in the dark. Is there a chance any of my other teeth are at risk for root canal or extraction? Is there any way at all to tell, or will I just be blindsided when I finally get the exam? I really don't want to be blindsided.

I tried my best to give a good view of all of the teeth, but the back top molars were especially difficult. Numbers 4 and 14 are the problem teeth, as you'll be able to clearly see. Also, I have an extra tooth (number 6, I think) that sticks out and creates a little gap, just FYI.

Thank you, in advance, for taking the time to look. 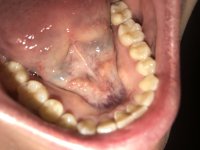 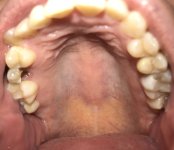 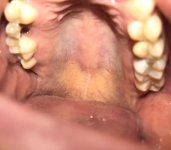 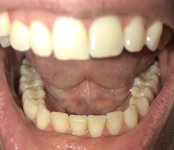 Can't see anything too horrific in the rest of your mouth, hope that helps.
M

It does help, thank you

A
Scared for my next visit . Don’t know what to expect

Sep 1, 2020
missiri
M
L
What can I expect if there’s something wrong with my root canal?!

W
What can i expect? Super anxious

M
Where to start/What to expect (Pics of bad teeth)