I am 25 and haven't been to the dentist since I was around 14-15 years old. Until then, my mom had never taken me. I needed a few fillings and they were scheduled across a few appointments. The details are fuzzy, but on one occasion the dentist could not get me numb. He was doing a deep filling, I believe, and noticed me starting to squirm. He asked me what was wrong and I told him it hurt. I sat there and took it thinking it was just part of the process. He said no, it shouldn't hurt! So he pumped me full of more novacaine. He gave me more, and more, and more until he said he couldn't give me any more. He knew I was still uncomfortable and decided to put in a temporary filling and finish it during the next appointment. He was very nice and apologized and made it a big deal what a "trooper" I was. I don't remember much about my subsequent appointments. I do know he gave me gas at the beginning of my appointments and apparently it worked because I don't remember having any pain with the remaining fillings and while he finished the one he had started. He also pulled a tooth at one point and I didn't notice!

Fast forward 10 years and all I can remember was the one incident where he couldn't get me 100% numb. About 6 months ago I started feeling a little discomfort in my lower right back molar. I first thought it was my jaw but the weeks went by and I realized it was my tooth. I cried and panicked for weeks, not because of the pain (which was very minor) but at the thought of the going back to the dentist.

I finally gave in and called the dentist and went in for the initial appointment. I'll spare the details, but it didn't go well. Not terrible, but not good. I did find out that I needed a few fillings for new cavities and also a few of the old fillings replaced. As for the right molar, I have a very large filling in that tooth that will require a build-up and a crown.

It's been five months since that appointment and I'm now giving myself a deadline, that I absolutely MUST start my treatment after finals at school, so before the month of May is over. I have spent the last five months crying, having constant panic attacks, and contemplating suicide. I know I am a smart, reasonable person in most aspects but when it comes to the dentist I have no control over my emotions.

My biggest fear is that the dentist won't be able to get me numb. I'm absolutely terrified. If I remember correctly, the dentist was able to get me sufficiently numb on more than one occasion, but all I can think about it the one time he didn't. I'm going to a different dentist now, as I no longer live in the area of the previous dentist. The new dentist said they would give me an anti-anxiety medication beforehand (Xanax, Valium, etc.), give me gas when I got there, topical, then local anesthesia. I'm very scared it won't be enough

Another fear is that the current filling being replaced will be too large and deep and I will end up needing a root canal (I asked him if this was a possibility and he said yes, it's a possibility, but they'd just have to see when they did it.), which just tears me up inside just thinking about it.

With all that being said, I HAVE to get it taken care of. My newest dilemma is this: Do I want to dive in head first and get the right molar worked on? It's the scariest and most extensive but if I can get through it everything else will seem easier. It is the tooth that is causing some minor pain so I would have the bonus of pain relief if I got it fixed first. The downside is that it will give me the most anxiety up front. Or... do I want to start with just a simple cavity on the upper molar above it and hopefully have a good experience so I can ease into the more complex treatment?

I feel so hopeless. I hope I can share a success story in the near future but for now I have trouble getting through each day..
Last edited: Apr 19, 2012
B

I am so sorry you are going through so much anxiety and fear but please know you are not alone, I really do know what you are feeling. Well one thing I can say that Valium or Xanax will help you to stay calm. The other way you could be sedated with I.V. so you would not know what even went on. But honestly I think the Valium would help you allot.

Hi there!
First, welcome to DFC!

Second, sorry to hear you are having such a difficult time! It's amazing how one bad experience can override all of the okay experiences. We have a lot in common. I'm 23 and have a fear of getting numb from a similar experience. You are not alone! There is some really good information on this page about issues with getting numb and may explain what went wrong at that appointment. Lots of people have a particularly difficult time getting numb with bottom teeth for reasons explained on this page: 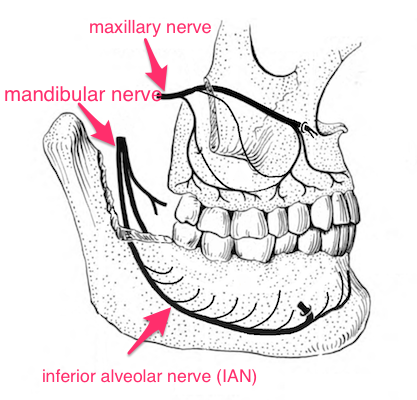 Find out why you may not get numb enough, what dentists can do to get you numb, and how to ensure your treatment is painless.

It's great that you have found a dentist and have set goals for yourself!

As for where to start? this is tricky...depending on how much that tooth is bothering you, you may want to get it done so you can have some relief and experience some immediate benefits. However, if it turns out to be difficult, you have to be certain that the experience will not scare you off again without getting the rest taken care of. A lotof people start small to build up some confidence and trust in their dentist before tackling bigger things. Might be the way to go if you want to test the waters with your dentist and see how you like them...kind of like a "test-drive" before embarking on a road-trip (i.e. the tougher job).
J

I agree with everything that both Bisja and KitKat said.

Also, a root canal (if you end up needing one) isn't the horrible, painful ordeal that it's made out to be. It really isn't any worse than getting a filling, although it does take longer.

Just promise yourself if they can't get your tooth numb, they cannot work on you. You are in control, you are not 15 anymore.

I would also maybe get a second opinion on what has been diagnosed, you are only 25, you had fillings done at 15, I don't think they should need replacing so soon. I would be wary of crowning a tooth if it hadn't had a root canal first. Why not just replace the filling but do not prep for crown yet and see how it goes. If it does need a root canal get yourself referred to an endodontist for a better experience/quality of treatment.

No need to fear root canals - I find them more relaxing than fillings lol.

It sounds like this dentist has lots of techniques to give you a comfortable experience. I am just questioning whether all the work is really necessary. Deal with the painful tooth for sure but if it does need RCT, go to an expert (endodontist). Best wishes.
D

I had my first filling done this morning and it went great! I met with the new dentist who decided to do a whole new exam because she was a little unsure about the treatment plan the other dentist had made for me. Turns out she had totally different plans for me. I don't need a crown on the molar I though I did, nor do I need any fillings replaced. She said they look great, but my jaw pain is coming from my wisdom teeth, which need to go. She found cavities in two molars and a crack in another, so she suggested I get a crown on it. So now my treatment plan is: wisdom tooth extraction, 2 fillings, and a crown for a cracked tooth. I promised myself I'd start getting work done as soon as this semester was over, so I went ahead and got a filling while I was there.

The dentist was so patient and kind, it made ALL THE DIFFERENCE in my comfort level. I was still scared to death but she gave me nitrous (which worked like a charm!) and two shots of novacaine before she got started, just to put me at ease. She asked if I had headphones with me and suggested I put them on so I can just lay back and enjoy my music and my nitrous! I did have headphones and took her advice. The filling was uncomfortable, lots of buzzing and knocking around inside my mouth, but it was over in no time! The minute the hygienist put the UV light in my mouth to set the filling I was overcome with relief! I did it!!

I still have quite a way to go, though. I am especially scared of the 2nd filling and crown, because they are on the bottom. She suggested I get them both done at the same time so I could be done with just one more appointment with her. I'm not sure what I'll do yet, but I feel much less anxious about it than I did before!

I'm pretty nervous about the wisdom tooth extractions as well. Thank goodness I'll have IV sedation and will be unconscious for that procedure. I know a lot of people have had pretty easy recoveries but I've heard some horror stories, too. I feel like I can manage it, I always adhere to the physician's instructions rigidly and I'm off for the summer and can take as much time as I need to rest and take care of myself.

But as for now, I'm celebrating the small victories!
You must log in or register to reply here.

N
History of sexual abuse how to disclose fears

A hello, a history and my current situation (which is why I'm here)

A
this is my story. I'm 43 and haven't seen a dentist since I was a teen