PLEASE GO! Not been for 20 years

I’ve been a long time lurker of this forum, obsessively checking it to see if anyone was in the same position as me and comparing myself to others.

Long story short I am 33 years old and haven’t been to the dentist for about 22 years. I never really liked it as a kid so just stopped going and brushed it off every time my parents told me I should go. Fast forward many years and I’ve probably been depressed about the state of my teeth and gums for about 10 years now. My gums are bright red and swollen and had a load of plaque and tartar built up. I was desperate to at least try and do something but felt it was too late and the embarrassment of someone seeing the state I had let them get in just overcome me! I cover my mouth when I laugh, I don’t show my teeth in pics, I mumble when I talk because I just feel like everyone is looking at my teeth and gums and I am so embaressed.

About a month ago I decided enough was enough and googled a dentist that specialises in nervous patients and sent an email. Spoke to an amazing lady who rang me and spoke through everything with me. She booked me an appointment for a month later (long waiting times). I very nearly cancelled but this is taking over my life and has even give me thoughts of suicide because I thought I was going to have to have all my teeth removed! I’ve been frantically googling for years and reading horror stories about all sorts.

Anyway, I finally plucked up the courage to walk in. I cried while I waited and I cried on the chair. I had a full mouth assessment and to my surprise even though I haven’t been for 20 years I needed no fillings as had no cavities (I don’t eat hardly any sugar) but as suspected, all my teeth at the front has gum disease. Although I was surprised to hear the pockets were only 2-3mm. (I had convinced myself I had severe periodontal disease and you would think so if you saw the pics). However the dentist booked me in for 3 hygiene visits but the next one wasn’t till July! Felt a bit gutted as now I have been I just wanted to get there! Walked out the dentist like a weight has been lifted and I can’t believe I actually did it. Dentist didn’t judge me at all.

To my surprise I had an email this morning saying the hygienist has a cancellation today and would I like to go. LET'S DO THIS I thought! It’s now or never! So off I went today. Was equally as nervous today but the hygienist was amazing! She did a scale for about 30 minutes and was able to get a lot of the plaque off as a starter. I felt absolutely no pain whatsoever! My teeth look and feel a million times better already! I can’t believe it. This was only a starter appointment but she said she was able to get a lot of it off on that appt but I will need a good few more to try to get my gums decent again. Gums still red and swollen but plaque build up has been removed.

I honestly am so happy already and can’t wait to see if she can hopefully help me more. PLEASE if you are scared please bite the bullet and go. It will change your life.

First off , welcome and glad you shared your story!! This is awesome...you did great and you sound like you have such a caring kind dental team! This is awesome you really stepped beyond your fear and what a pay off ! 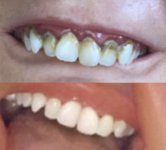 Finally feel brave enough to post my before and after. After pic is after 5 deep cleans / scale and polish. Can’t believe I didn’t go sooner. So ashamed at the before picture.
S

@Pumpkingirlamazing!! Your teeth are beautiful! Congratulatios, sure you’ll inspire many to take the leap!
P

Thank you so much

@Pumpkingirl Ah this is so encouraging! Thank you for being brave enough to post your before/after because wow! Your smile is so beautiful PumpkinGirl!

You said you got deep cleanings done, which makes me hopeful for my own teeth (unfortunately for me I need extractions, but we’re hoping to save the vast majority of my teeth); anyway, I was really worried when deep cleanings were mentioned because I’ve been told a million times you only get deep cleanings if you have severe periodontal disease or some such, so I was worried that’s what I have (never mind that it wasn’t mentioned to me, but you know I’m sure how fears get to us!) Also seeing the difference the cleanings make—ah it really is extremely encouraging to me.

But this isn’t about me

congratulations on your treatment! Make sure to treat yourself and smile loads! You deserve it.
P

Thank you so much! This is about you! If I can help you in any way I will! Where are you! The uk or USA? Because I am actually so surprised to see on here how much people are having extractions? It’s kind of what made me so scared and when I mentioned it at my dentist they were horrified and said that’s the absolute last resort! But no I was convinced I had periodontal disease too! But yeah I had I think 3 scale and polish and 2 deep cleans. That’s what I think anyway. They just scrape from under the gum the scrape all the plaque from under there! But it’s not painful and I didn’t have numbing either. What’s your plans what’s the next step in your journey? I am always here to help xxx
A

I was surprised too but I felt reassured because the dentist said a) it was the last thing they’d want to do and b) they went from six down to four (although that’s only potentially. But she thinks she can save two of them.)

Basically she said the problem with mine (or my problem teeth as I call them) is that they’re too damaged at this point. That even if they look okay, they’re not (and one does not. It’s the one that made me go in for the first time in a decade! I have a crack in it and severe decay) but that anything done to save them, would just be wasting money kind of thing. Which I accepted. And she was so adamant about saving the rest of teeth and maintaining that health.

Thank you for that! I actually think I might’ve had a deep cleaning before but just not known that’s what it was? Because I remember having my teeth scraped and such and being very sore but oh it felt so much better! I’m glad to hear it’s doable

Next step is my extractions actually! I’m a bit of a weird case because of my trauma and high gag reflex so what they’re doing with me is putting me under general, but while I’m out is when they’ll take x-rays and do a full exam. Then they’ll extract what they need to and hopefully do the restorations on the two teeth they believe they can save that way. Other fillings and deep cleanings will be at a later date! (And wisdom teeth removal too. I kinda forget about that one lol)

And the date for all that is November. So I’ve still got some time.
You must log in or register to reply here.

B
Please help im terrified of going to the dentist, its been 18 years!!

K
Just came back from the dentist and I've been crying all day please please help.

H
I haven't been to dentist since i was a kid and i'm now 27, please some advice needed.