Random piece of bone or tooth next to broken molar

I am a 24 yr old female and as far as I can tell, I'm healthyand I hate to admit, I've never taken the best care of my teeth and always had a fear of the dentist and I am paying for that now that I am older. About 2 weeks ago, I was taking a pic of my throat to see how swollen it was because it was very sore and when I looked at the pic, I noticed what I thought was an ulcer next to a broken molar. I didn't pay much attention to it but a week later when I took another pic, I noticed it was still there so I felt it and to my surprise, it wasn't soft and painful like an ulcer but instead, hard like tooth or bone. It was a little tender to touch when I put my finger bang on it but in general, its painless. At first I thought maybe a wisdom tooth but I doubt that given its location and that I have a wisdom tooth already grown in just above said broken molar.

What could this be? Me being me, I am thinking its something sinister and dreading my appt yet wishing I could get a sooner appt 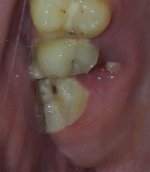 Hi Catlady,
Difficult to be precise from that photo but it does not look sinister. It is most likely gum irritation associated with the broken down tooth. Good that you are getting checked out next month.That is soon enough, try not too worry too much,
regards

I have something similar to this after my double extractions of my front teeth. My dentist said it's bone that is still attached to the jaw so not fragments or anything. He is hoping that the gum will grow and cover over it so he doesn't have to do alveoplasty on it
C

Thanks for your replies. The bone/tooth or whatever it is has grown or erupted a little more since this post. Its still not painful but I have noticed a bit of earache and pain in my jaw when I yawn or breathe in deeply and don't know if that might be connected to it.
You must log in or register to reply here.

H
What causes random pain a week after tooth extraction?