Undiagnosed pain - who to turn to?

Last February, I had a lower right molar extracted by my dentist, then 6 weeks later remaining roots removed by a specialist. In June, I thought the mild pain had stopped only after a few pain free days for it to start building again as a periodic dull ache. It's difficult to pinpoint the site of the pain though it still seems to be the extraction site. Sometimes my lower jaw has been tender to the touch at the bend of the jaw.
In May, my dentist checked closely then referred me to an endodontist who in early August did a range of tests, xrays and CT Scan of Lower Right 5, extraction gap and LR 7 and could not find a definite problem. He did say LR5 was non vital but said electric tests are not always accurate. He suggested widening of ligament on LR5 possibly being the problem but nothing definitive.
Last week the endo and the specialist who removed the roots reviewed the xrays and CT scan and said they could find nothing and to return in six months time for xrays.
Up to now my sleep has not been really effected. The dull ache seems to be getting more regular during the day as well. Painkillers have limited effect.

Also last week, I was at the hygienist for the first time in 5 years. She said I needed a further 3 visits over the next year to really clean them out. She also said I had gingivitis and inflammation round the molars. I wondered if this might relate to my lower right problem?

I'm getting to the stage of being a bit desperate as to know who to turn on. I did wonder if should be going to my doctor to see if its nerve related or some other non tooth reason.
E

Should have also added this xray of bottom right taken at end June. 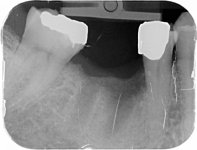 I'm a bit suspicious of the premolar, huge filling, shadow at the apex... I think it's either non-vital or heading that way. Surprised the endo didn't want to open it up for a look?
E

Thanks for your reply Gordon - much appreciated.

For some months I assumed it was from the extraction site until I suddenly wondered about it being adjacent teeth.
I think the endo did not want to open it up due to my being unsure where exactly the dull ache was coming from. He was keen to avoid starting work only to find it was the wrong tooth.
It is curious neither the endo or my dentist mentioned the shadow. As mentioned earlier there was a suggestion of widened ligament.

You mentioned the premolar possibly being non vital which would fit with the electric test done.

If it is the premolar, is it likely it can be saved by RCT or removed?

As a matter of interest could the premolar problem relate at all to the tooth extraction?

If it is the premolar, then from the x-ray, it very much looks like it could be saved with RCT.

Do you find hot drinks set the pain off?
Is the premolar tender to bite on?
Is the pain worse in the evening or on waking in the morning?
E

Thanks for your reply Dr Hirst.
The premolar has no reaction to hot or cold drinks. No reaction to chewing on it.

Fortunately, i've never had problems with pain overnight.
Originally, I had no reaction until later in the day but in recent weeks I may start getting the dull ache later in the morning, in the afternoon and evening. There is no rhyme or reason and the dull ache always comes and goes. Sometimes I might get the odd day when there is no reaction but overall it is happening more regularly.

Eros said:
As a matter of interest could the premolar problem relate at all to the tooth extraction?
Click to expand...

No. Definitely would be fixable with a root canal and probably a crown.

Well this looks like one of those really hard to diagnose pains. This is always very frustrating for both the dentist and patient alike. Have you ever been told you clench or grind your teeth at night?
E

Thanks Gordon and Dr Hirst.

I think one dentist said there was no evidence of clenching whilst sleeping. My wife also maintains that I don't either.

Its unfortunate I only have the xray (from my local dentist) and not the CT Scan. The specialists had both so I presume the CT scan did not raise concerns apart from the comment of possibly 'widened ligament'.

Until now the dull ache has been hard to place but with it happening more regularly I am thinking it is likely to be from the premolar.
You must log in or register to reply here.

T
Haven't been to a dentist in 10 years. Have receding gums and tooth pain and terrified to go.