vertical wisdom teeth with cavity and close to nerves?

Hi,
I've been struggling with two wisdom tooth,but my main worry is the one right side-vertical impected tooth that nearly touched the nerve back in february. My dentist wanted to wait to it become visible which it did, and was worried about the nerves. Cavity set it I can see that, so gotta remove it sooner or later. I can provide xray if it can help you,but its not newish as in most recent. Done in february this year. Can wisdom tooth root grow over the passed months an now touch the nerve? Roots are a bit curved toward the nerves. I am utterly nervous about this as I know a bloke who got his nerves damaged beyond chance of repair. One dentist talked to me as it will kill me and that sparked a major anxiety.

The only way to know for sure is to take another x-ray with the tooth in its present position, they can erupt away from the nerves but also the roots can still be growing...
L

I wanted to take one,but dentists around here claim almost six months xray is valid. A lot can happen in a matter of weeks,much less months. Just the amount of info I got was all for it has to be removed. And my dentist offered to have it removed via plucking it out which I guess is bad move since the cavity bit is still under gum. How do you treat such wisdom teeh without causing a trauma? Can you safely extract wisdom tooth wrapped in nerve?
L

Hello,
I just had all 4 wisdom teeth out and one of them was both close to the nerve and with a cavity. It was partially erupted. An oral surgeon took that one out because it was beyond what the dentist could do. Can you ask your dentist for a referral to an oral surgeon? They may be best to help you. They got mine out with no damage.
Good luck!
L

At my dentist office works an oral surgeon,but haven't had the chance to talk to her yet. The other dentist I went,who studied at the clinic for oral surgery just to ask for second opinion he basicly told me to go asap, telling me it will soon get into bloodstream and no turning back. I kind you not. That did not do good for my anxiety and panic. I finally managed to walk into a one dentist office alone and barely had any sleep due to this. I hope nothing of the sort will happen and that the shots will work.
L

Believe me, I understand! Not only do I have the worst phobia imaginable (I think even my special needs dentist thought she was out of her depth with me), but I found out I needed my wisdom teeth out about 15 minutes before the surgery. The original plan was that I wouldn’t know what treatment I was having until just before, but a communication error led to me finding out about the procedures. As wisdom teeth removal was not on the list, I had discounted the possibility and was in shock and panicked when I was told.

What worked for me in terms of going through with it was the pre-med they gave me before surgery- I think it was midazolam but I’m not sure. Because I had already been fasted for general anaesthetic, the pre-med had a full effect and although I was told it would take 30-60 minutes to work, I actually don’t remember anything after about 5 minutes. Next thing I remember is being told the surgery was over and that I had actually been awake for an hour without any realisation of it. So as far as I’m aware, I didn’t even see a needle, let alone feel one. If I was awake during any of that, I have no memory of it.

If you can get a pre-med like I did, it might really help you through it. I had doubts that it would work and thought that my brain would fight it, but in the end, no chance. Whatever you do, though, don’t try to self-medicate. Just let them know what your needs are so that they can take care of you.

All the best!
L

We don't do general here. You get 2-3 shots in gums, put a cover over your eyes and once it kicks in they begin. I have so much fear and anxiety, but 10 years out of office is to blame to an extend. So many stuff to deal and worry,what if's,but that is the other topic

Thank you for your input and always welcome more
L

Really? I thought if it was close to a nerve you had to have GA. Wishing you all the very best, I hope it all goes well!
L

Nah,you are awake here. You feel it. There is no pain,but you feel pressure. Your mind is very much alert. But hopefully it will go well. My last op anestetic didn't work so it all left a mark

lena25 said:
I wanted to take one,but dentists around here claim almost six months xray is valid. A lot can happen in a matter of weeks,much less months. Just the amount of info I got was all for it has to be removed. And my dentist offered to have it removed via plucking it out which I guess is bad move since the cavity bit is still under gum. How do you treat such wisdom teeh without causing a trauma? Can you safely extract wisdom tooth wrapped in nerve?
Click to expand...

You can't safely extract a tooth that's wrapped round the nerve without potentially causing nerve damage. But it doesn't sound like yours is. Can you post the last x-ray?
L

Here it is. Part in question that is
L

That's pretty close, that would be a good candidate for removing the crown and leaving the roots in situ.
L

I read about coro-something method that deals with this issue. Went in for another opinion. One Doc rained fire and brimstone on me about other stuff,took a look at the tooth peeking out, refered me to oral surgeon at hospital asap. There will be some bone drilling. The other, who boasts about having every solution for tooth issues talked how if we treated gum issue it might actually come out and then filling. He suggested filling even if it doesn't come out fully. What would happen to if I left it(if they all persist in sending me to the chair and cut it?) Aside from damaging the tooth next? Or breaking on its own and see the fate of left wisdom toth that only has root peeking under gums.

Just to let you know:dentists in Serbia are mostly 95 % for extraction of any tooth and then putting implants
L

Another update:there is no question about removing the crown cause of cavity. It would be risky to leave cavity caught tooth in the bone. The only advice I got was to do full 3d scan so they can see whole picture roots,nerves and all. Told not to wait until october as pulp might get infected then it will be harder.*tired sigh*

I get the impression that it doesn't matter what I say, your dentists will do what they want anyway

The decay is very close to the nerve in the tooth, you will be likely to get symptoms from the tooth soon if something isn't done. Filling it is unlikely to be successful due to the size of the cavity.

Coronectomy (just removing the crown of the tooth is a viable treatment as long as it's done before the pulp gets infected. See this series of x-rays of a tooth very similar to yours: 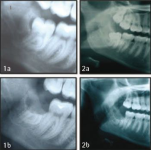 Sad to say: yes they will. It makes me just wonder how much time I have left before all hell breaks loose( days, weeks) and what will happen then? And make me anxious as hell

lena25 said:
We don't do general here. You get 2-3 shots in gums, put a cover over your eyes and once it kicks in they begin. I have so much fear and anxiety, but 10 years out of office is to blame to an extend. So many stuff to deal and worry,what if's,but that is the other topic

Thank you for your input and always welcome more
Click to expand...

I have to ask this as it really hit me.. What exactly do you mean by a cover over your eyes? Why would they do that?
L

They put a green cover over your eyes with opening for the nose and of course mouths. No idea. They don't do it in most private offices. In some vids on youtube I saw the same thing? Guess its not to freak folk out?

I phoned one of the first dentists I've been(he actually listens) over some jaw issues, and swelling and he said to it might be TMJ issue not wisdom tooth, but to send the xray to forward to oral surgeon. So seeing her on Monday with Gordon's xrays too. Fingers crossed she doesn't say hospital too and considers coro if infection hasn't gone up and about.
You must log in or register to reply here.