What to eat or not after extraction

I can't stand pre made food or TV dinners I eat made from scratch. How does caramel chunks go with macoroni cheese?

I am standing aside and leaving you and Jaylah to it, carry on.

Well, shes not here to take the bait, or it is bed time over the pond or something ?

She's on now. She'll get around to you, 3 things in life are certain, taxes, death and Jaylah coming back to fight the cause. Guess it gives me a night off, ha

I know the kind you are talking about Carys, with those little specks of (I think?) dried vegetables (carrots peas and corn as I recall) in them. Years ago they used to have little pieces of dehydrated scrambled eggs in them, too. Maybe some brands still do. I haven't eaten them for quite some time, but I don't remember the last one I ate having the eggs. Anyway, they come in a little styrofoam cup and you are supposed to peel the cover off part way, add boiling water, wait a couple of minutes, then remove the cover entirely and stir. Those are usually sold as "Cup-O-Noodles" here. They are usually about 10-times more expensive than the other kind of pot-noodle.

Then there is the other pot noodle, often called "ramen" here. Those don't have all the dried bits (and as much assorted chemicals) in them. It's just a package, about the size of your hand, of dried squiggly noodles and it comes with a "flavor packet" that is essentially just bouillon granules (Beef, chicken, pork, etc.) with 3 or flakes of dried parsley just to make it interesting, I guess. You actually have to have a "pot" to cook the noodles in (in some boiling water), and then you add as much or little of the flavoring packet in when they're cooked. If you're in a hurry, or are a very poor starving college student, you can eat them "as is." Or you can toss in some veg and chopped up fish or meat. If you make it with more water, it's actually a noodle soup. Or you can pour off most of the water after the noodles are soft, and make it more pot-noodle. And if you're going to do the latter, you'll probably only want to use half the flavor packet or else it will be too strong. Especially too salty. They sell for about 1/10th of what "Cup-O-Noodles" does.

I don't suppose either one of them is all that healthy for you, particularly if you don't add any of your own veg, etc. And they are both pretty high in sodium. But, when you're trying to squeeze every bit out of your food budget, they are filling at very little cost. Particularly the ramen.

There was a television chef in this country about 20 years ago that used to say, "There are somethings we eat at certain points in our lives because we have to. Later, we have to occasionally eat those thing because they became a part of who we are." (I'm paraphrasing there, I don't know if the exact quote was ever published.)

For me, that was pot noodle. When I was running out of money, trying to finish university, there was precious little else I could buy that would fill me up for 10-cents.
J

carole said:
3 things in life are certain, taxes, death and Jaylah coming back to fight the cause.
Click to expand...

Am I really that predictable?

See, a cultural difference was all there was to it - different countries - slightly different products. So, no debate here then really is there.

"There are somethings we eat at certain points in our lives because we have to. Later, we have to occasionally eat those thing because they became a part of who we are."
Click to expand...

Yes, that is very true !

Yes you are Jaylah, and Carys I told you she'd be back. I'm basking in the glory of a night off.

Ah see, in the UK, there is only ONE Pot Noodle....literally - it's a brand name!

I sometimes used to have them for lunch in winter when I had an outdoor Saturday job, and it was the only hot packed lunch I could take! Tried one recently for nostalgia's sake, and thought it was absolutely disgusting! lol

Also find it hilarious that all their meat-flavoured ones are suitable for vegetarians!

Apparently they do now contain 50% less salt than they used to...dread to think what they were like before!

Ah yes, those would equate to what we think of as Cup-O-Noodles.

All of which, if I understand correctly, are versions of an original Oriental street food often called "pot noodle."

but not before I slip a POT NOODLE in !! 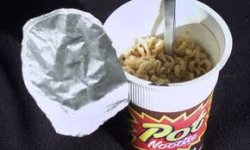 Well I wouldn't eat that mans noodles be they pot or cup, his hands are dirty, yeeeeeuuuuuuuuuuuuwwwwweeeeeee! And he has dirty finger nails, bbbbbbllllllllllllaaaaaaaaaaaaahhhhhhhhhhhhhhhh

Kim, this ones for you, looking forward to reading and maybe trying your lentil curry. If I knew how to do a link it would be much easier but I don't so it has to be this way.

Found you - will put the recipe on sometime today.
H

List of things I'm planning to eat after all 4 of my wisdom teeth are extracted next week! Anybody with experience, can you let me know if these are all OK? I'm so scared of dry socket it's not even funny.

* mashed potatoes
* mashed mac n cheese
* blended soups (to get any chunks out)
* blended yogurt (again with the chunks)
* milkshakes and protein shakes
* ICE CREAM!!!!!!!!!!!!! (I never get to eat this otherwise, so I'm kind of excited heh)

Trying to think of other things but drawing a blank.

I am trying to make sure I will be able to eat enough and get the necessary nutrients etc. Bleh. Why can't extractions just be done magically??

I thoroughly enjoyed chocolate pudding after having mine removed!
L

I'm not sure if this is what Americans call pudding? I'm confused because to me pudding is like a sponge pudding (sticky date, spotted dick) but I'm guessing that wouldn't be easy after an extraction. Not unless you maybe blended it with cream/custard? Anyway angel delight is like an instant mousse powder you mix with milk. Banana is the best flavour I could find but I want to try butterscotch. Not that I want any more teeth removed as an excuse!

littlestar88 Butterscotch angel delight is really lovely, I haven't had it for years but you have just brought a very good childhood memory back to me, I really want some now. Can't stand the strawberry one, love the chocolate one.

I have just mixed up my angel delight - butterscotch flavour. Haven't had it in years but thought it might cheer me up today and be easy to eat. Def the best flavour!

Hi Sparks, didn't you do well

I am so glad your friend turned up for you. How funny about the angel delight, no sooner said than done, my mouth is watering now, I may have to go to the corner shop and see if they have some now.

I am really happy that it is over now, really well done, on all fronts

thanks carole, go get some angel delight it's still great even after all these years!

I'm still doped up on painkillers but hoping things go ok and I heal quickly. I'm glad that it's over with now. Just need to get the rest of the bits and pieces fixed.

J
Extraction on both sides… what to eat!?

R
10 days since extraction - is it safe to eat?