What do the numbers dentists call out actually mean? Find out all about

(we’ve also got a separate page on Dental Terminology here)

This system is very popular in the UK and Ireland. The 4 quadrants of the mouth are:

Within each quadrant, the teeth are numbered from 1 to 8 going from the front tooth to the wisdom tooth: 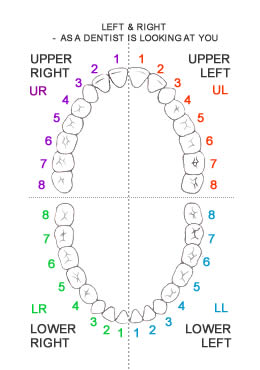 For example, UR1 is the upper right central incisor, and LL8 is the lower left wisdom tooth.

The American system of numbering teeth from 1 to 32 can hardly be described as elegant… but this handy tooth chart explains it all:

The first digit denotes the quadrant and the second digit, like the Palmer method, denotes the type of tooth: 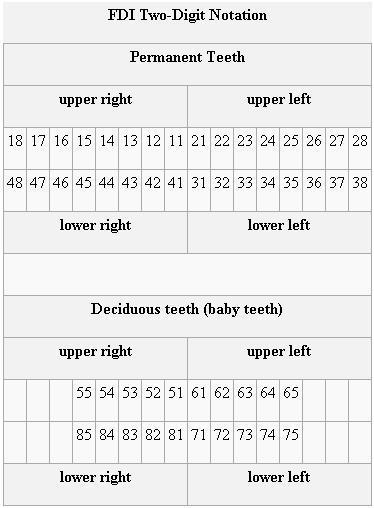 The mouth is divided into 4 quadrants (upper left, upper right, lower left, lower right), and as in the Letters and Numbers system, teeth are numbered 1-8 going from the front tooth to the wisdom tooth in each quadrant. Right angles symbols are used to denote which quadrant is being referred to:

In the UK, Ireland and New Zealand, the most common screening tool used is the BPE (Basic Periodontal Examination). The mouth is divided into six sections as follows: 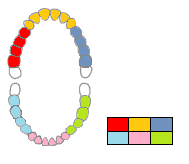 Each section is given a score, based on the least good finding in that section. To do this, a perio probe (a special gum millimetre ruler) is “walked around” below the gumline. The force used while doing this is so light that you may not even notice it being done.

The scoring is as follows:

In the US and Canada, the numbers refer to the periodontal pocket depth readings. Normal, healthy pocket depths are usually 3 mm or less. Numbers may be read out in groups of three, which indicate readings taken from different areas of the teeth. To get an idea of what the different pocket depths mean, see above.