Most commonly, premedication is prescribed for relieving anxiety in the hours immediately before a dental appointment. An anti-anxiety pill taken the night before the appointment, an hour before going to bed, can help with falling asleep and getting some rest. Alternatives include a stiff drink or stocking up on rescue remedy…

Oral sedation refers to taking a drug by mouth to produce a state of conscious sedation during dental treatment, as an alternative to inhalation sedation or IV sedation.

Choosing the right medication, medication dose, and treatment plan should be based on a person’s individual needs and medical situation, and done under an expert’s care. Only a clinician in person can help you decide whether the medicine’s ability to help is worth the risk of a side effect.

Temazepam, one of the benzodiazepines, is now the most commonly used premedication among dentists who’ve had training in dental anxiety management. It was originally marketed as a sleep-inducing drug but its short half-life (about 4 hours) makes it ideal for use as an anti-anxiety drug. It starts to kick in after about half an hour to an hour. A usual dose for an anxious, otherwise healthy adult of normal weight is 10 mg, or 20 mg for a more severely anxious adult.

Temazepam works great for many people. A night time temazepam can help you get a decent night’s sleep before your appointment, and taking temazepam about 90 minutes before the appointment can help with pre-appointment nerves.

However, it doesn’t work well for everyone – in some people 40 mg of temazepam produces minimal effects whilst in others as little as 10 mg produces profound sedation. This is a problem with all benzodiazepines – there is no known method of identifying who is susceptible and who is resistant to their effect. And the same person may react differently to them on different days.

Because it’s so well-known, Valium (another benzodiazepine) is still prescribed by many dentists. And over the years, we’ve had quite a few posters on our forum who did find it useful for calming pre-appointment nerves. However, temazepam’s faster onset of action and shorter duration of action mean that nowadays, it is the preferred choice for dental anxiety.

Diazepam is available in tablets of 2 mg, 5 mg and 10 mg. The dose depends on the individual and factors such as age and general health. As a rough guide, a dose between 0.1mg and 0.25mg per kg of body weight one hour before the dental procedure and after a light snack is recommended 1. One major disadvantage of diazepam is that it stays in the system for much longer than it is needed (it has a half-life of 20-100 hours).

Can I take temazepam or diazepam as a premedication before IV sedation?

Yes you can. You must however let your dentist know that you are planning to take them and what dose (unless your dentist has prescribed them and knows anyway). Be sure to inform your dentist beforehand, rather than on the day, because you may forget to mention it otherwise.

When not to take benzodiazepines (contraindications)

This varies from drug to drug. For example, some benzodiazepines are safe to take if you have liver problems, while others are not, and some are safe to take if you have heart problems, while others are not. You should be sure to inform your doctor or dentist if any of the following apply: known allergy to the drug, neuromuscular disorders, narrow-angle glaucoma, pregnancy, respiratory diseases, congestive heart failure, impaired kidney or liver function, depression/bipolar disorder/psychoses, chronic bronchitis or other conditions. Also if you’re taking other medications be sure to mention this.

Travel warning: Don’t travel on your own after you’ve taken drugs in the doses mentioned here – make sure you have an escort, even if you’re walking to your dental practice or clinic. It’s easy to become disorientated and miss your stop if going by bus or train, or walk straight in front of a car. So find someone to accompany you. And please don’t pop pills and drive!

Always read the label or talk to your doctor or pharmacist and make sure you understand the restrictions on things like alcohol intake, driving, operating machinery etc.

What people on our forum have said about anti-anxiety medications

“My doctor prescribed me valium. I take one 30 minutes before my appt. It makes you a little sleepy and your anxiety disappears. It puts you in a “whatever” mood and helps you stop thinking about the pain or worries.”

“I did my first visit after 12 years today, basically I had a valium (diazepam) before I went. It really helped. I used to panic attack and had fainted in the chair in the past but the pill I had today really relaxed. I just felt so much better.”

“When I had my extractions, my dentist gave me Temazepam to take the night before and the morning of. That put me into a sort of ‘slow motion’ feeling before I even got into the surgery. I then had IV sedation which was brilliant.”

Alcohol’s use as a sedative in dentistry has never been popular :(. Still, alcohol has long been used by apprehensive patients as a means of self-medication before dental appointments. Some people find that a G&T or a small glass of wine before their appointment does the trick:

“I’m one of those people who does not respond well to anti-anxiety meds because they either knock me right out, even in the smallest dosage, or the side-effects, that never go away, just compound my problems.

So, I find that ONE (not a whole bottle) small glass of wine works wonders in just relaxing me enough to get some relief, without any of the horrible side effects of medication. And I honestly don’t understand why everyone gets up in arms when you talk about using a TINY bit of alcohol to self-medicate responsibly.” (from our message board)

Don’t go overboard, though! You’re not doing your dentist or yourself any favours by stumbling in reeking of beer and whisky. If at all possible, alcohol should be avoided before any actual treatment:

“The trouble with whisky as a “premed” is that it will cause the local anaesthetic to be less effective due to the vasodilation effect. It also opens up blood vessels quite effectively and will make a big difference to post op bleeding. There’s also a big question over consent to treatment when you’re impaired through alcohol.” (Gordon Laurie, BDS)

No, not THAT herb! We’re talking about rescue remedy…

It may be a placebo effect, but many people swear by Rescue Remedy. 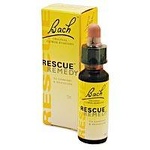 There is no real evidence that CBD oil does anything much for anxiety in quantities that can typically be bought for personal use. But the placebo effect is a very powerful thing, so if you think it would help, why not?

Midazolam, the drug used for IV sedation can also be used for oral sedation. It produces sleepiness and memory loss.

It is given as a drink (usually mixed with orange). This can be useful for people with extreme needle phobia (although often a Venflon will still be placed after the sedation has kicked in).

Temazepam can be used not only as a premedication agent, but also to produce oral sedation in adults when used in higher doses such as 30-40 mg 1.

How common is oral sedation?

In the UK, oral sedation on its own is only rarely used to produce a state of conscious sedation (as an alternative to inhalation or IV sedation). The level of sedation that can be safely achieved tends to be lighter, and it’s nowhere near as predictable and reliable as IV sedation.

One problem associated with oral sedation is that it can be a bit of a hit-and-miss affair. Basically, you don’t know how well the drug will be absorbed from the stomach. Because the response to a drug is unpredictable anyway, you have to tailor the dose so that the 25% of people most susceptible to the drug won’t get an overdose. But that means that the 25% who are least susceptible won’t get enough… Body weight, height, or gender are not good indicators of how high the “ideal dose” should be, because the drug exercises its effects on the nerve cells in the brain. So, if you’re quite large, you can’t take a little extra “just in case”. A standard dose might have virtually no effect on a petite female, but a large guy might be totally zonked after taking the same dose… you get the picture.

When using IV sedation, the effects are almost immediate, so it’s easy to give more midazolam until the desired level of sedation is reached. This isn’t the case with oral sedation, where you have to wait about 10-20 minutes to see how the drug affects you. Seeing how IV sedation is so much more predictable and reliable, oral sedation is only really used when IV or inhalation sedation are not appropriate or acceptable to the individual.

This is not available in the UK and Europe, but is hugely popular in the U.S. as an alternative to IV sedation in the dental office. You can search our forum for first-hand accounts.

What Can Help? Strategies for tackling dental anxiety and fear

This website uses cookies to improve your experience while you navigate through the website. Out of these, the cookies that are categorized as necessary are stored on your browser as they are essential for the working of basic functionalities of the website. We also use third-party cookies that help us analyze and understand how you use this website. These cookies will be stored in your browser only with your consent. You also have the option to opt-out of these cookies. But opting out of some of these cookies may affect your browsing experience.
Necessary Always Enabled

Any cookies that may not be particularly necessary for the website to function and is used specifically to collect user personal data via analytics, ads, other embedded contents are termed as non-necessary cookies. It is mandatory to procure user consent prior to running these cookies on your website.