When was dental air abrasion invented?

Treating teeth with air abrasion was first tried in the 1940’s, and a commercial machine called the Airdent was marketed by SS White. It might have caught on, but another device was competing for dentists’ attention. As you may have guessed, this new device was the air rotor [editor’s note: that’s “the drill” for the uninitiated – also known as a high speed air turbine. The air turbine part is at the tip of the handpiece, and is driven by air pressure]. The shrill whining turbine thing has become a dental cliche. Most media articles about dentistry finish with the noise of an air rotor, as it has become synonymous with repairing teeth.

Fast forward to the 21st century, and we find many improvements in the original air abrasion technology. Coupled with huge new advances in dental care, many dentists have rediscovered air abrasion. It has many more applications nowadays that are complementary to the more modern techniques and materials available now.

How does Air Abrasion work?

There are many machines on the market now, each with their own fan clubs. They all work essentially by blowing 27 micron aluminium oxide powder using compressed air through very fine tips. Some systems are experimenting with adding water to the powder stream, and others are trying inert gases rather than compressed air. When the powder stream hits the tooth, it literally puffs away the surface it is pointed at in a remarkably gentle but efficient manner. If the tongue gets in the way, the patient feels only some air pressure.

Air Abrasion is not advised for removing old silver fillings, but it can remove white fillings rather well, and is ideal for teeth that have never been filled, such as in children. The downside is that the devices do blow powder into the mouth, but most people are not bothered by the gritty feeling. When they rinse, all is back to normal. 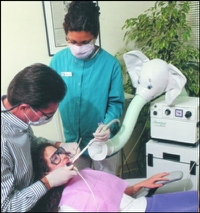 Martin uses an air abrasion system made by Crystalmark, pictured to the right (the elephant unfortunately doesn’t come as standard): “This is the best I am aware of, and costs around £6000.”

Air abrasion systems come in all shapes and sizes – and even colours! Like this funky purple design classic which would make a great centrepiece in anyone’s livingroom – if it wasn’t for the price tag…

What are the benefits of air abrasion?

Patients like the near absence of noise, and the total absence of vibration. Properly used, air abrasion often does not require local anaesthesia. You can imagine how disappointed folks are when they find they can have treatment without an injection, and feel no pain.

The buzz words in surgery now are ‘minimally invasive’. While the medics look at ways of doing things through keyholes, dentists are also excited by earlier more delicate interventions on teeth. Air abrasion excels at doing delicate work.

Ideally, early decay should be spotted by laser diagnosis. This is long before anything can be seen on an x-ray film, or visually. The laser readings are recorded in the dental chart at each check-up. Sometimes it becomes clear that diet and cleaning advice is not working, and the laser readings are inexorably increasing. If someone is clearly at risk from decay, and the bugs are winning, how nice to have the option of ‘micro dentistry’ using air abrasion! The air abrasion device may be used to gently remove the areas of very early decay before the hole can even be seen. Children benefit especially, as they feel so little, and the extra cleaning means that their fissure sealants are placed quickly, and with a better bond. Much smaller holes can be filled earlier in this way, rather than waiting until the hole is much bigger, or worse, cutting healthy tooth to get to a small hole.

Mums and dads are always impressed when the technology is demonstrated, and those who hate needles or drills are truly appreciative. It’s not a panacea for everything (such as deep fillings), but it’s a great extra option that suits a lot of dentists and their patients.

Martin worked in the NHS in Scotland for four years, and became disillusioned with the system, mainly with the excessive speed required which he felt was in conflict with the best interests of patients.

In 1980 the Chief Medical Officer for an oil company asked him to join, following many complaints about availability of care in the area. Martin designed and implemented a new dental service at the company headquarters, which became very popular with staff in Aberdeen and offshore.

Eight years later, the wanderlust struck, and he went on to work for eleven years for the Saudi American Oil Company in the Persian Gulf.

Oil Company funding has enabled Martin to attend lots of postgraduate courses in the USA and the UK. He chose to settle in Truro in 1999. Martin believes the best dentistry is no dentistry. Where dentistry is necessary, it should be minimally invasive, and done with care and attention to detail.

How to find a dentist who offers Air Abrasion