What is the Wand?

The Wand is essentially a computer-controlled dental injection. The flow rate of the local anaesthetic is controlled by a computer. This means that the injection is guaranteed to be slow and steady and therefore comfortable.

Many people who have had a bad experience with injections think that needles sting because the skin is pierced, but this is usually not so. Mostly, the stinging sensation is caused by the anaesthetic being fired in too quickly.

Obviously, it is possible for the dentist to control the speed with a standard syringe. But the idea of the Wand is to take out the “human error”. This can be very reassuring for people with previous bad experiences. A lot of people with needle phobia describe the Wand as their “Magic Wand”… 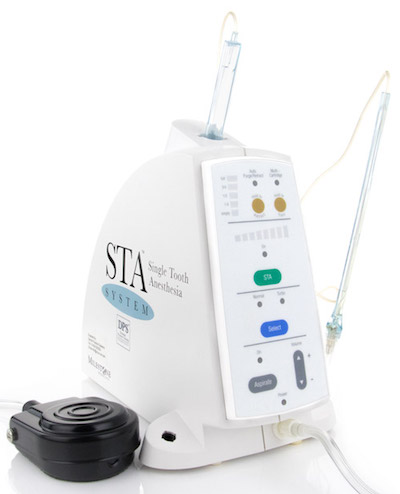 The Wand doesn’t look like a syringe. Welcome to the space age…

As you can see in the photo, the “hardware” looks similar to a miniature computer tower with brightly coloured buttons. On the top of the tower sits a cartridge with local anaesthetic. A tube connects this to a pen-like handpiece: 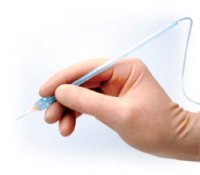 Disclosure: the pen does sport a small needle (you’ve got to get the local anaesthetic in there somehow).

Because it is held like a pen, the Wand is easy to handle and prevents getting cramps in the hand. To start the computer, the dentist uses a foot pedal (the black thingy in the photo) connected to the computer tower. The computer does the rest. That way, they can focus all their attention on holding the pen in the right position.

The flow rate is also the maximum absorption rate: this means as well as being slow and comfortable, the tooth can get more numb with less anaesthetic.

Another nifty thing about the Wand is that it has pressure feedback. So if it meets resistance, it slows down (with the standard technique, some dentists might be tempted to push a little harder when they meet resistance – which is a common cause of pain during injections).

The cartridge holder, tube and wand handpiece are all single-use disposables.

A STA is born

Nowadays, the Wand is equipped with a STA (Single Tooth Anaesthesia) function (hence the name Wand® STA). The STA mode allows the tooth to be numbed with less numbness to the surrounding area. This is great if you hate the numb feeling, as the lip and tongue go far less numb, or not numb at all. It also has huge advantages for kids, as it reduces the risk of them accidentally biting their lip while numb.

The Wand STA has two modes:

It can even speak! For example, it will say “cruise” to let the dentist know when they can use cruise control mode.

In the following video, a dentist explains the wand:

What are the advantages?

What are the disadvantages?

So why do so few dentists use the Wand if it’s that cool?

What people on our forum have said about the Wand

…a little spray to numb the gums then a few minutes slowly injecting small doses of anaesthetic through the computerised outlet system and I didn’t feel a thing!…My fear of needles is now a thing of the past. – from “The Magic Wand”

Not only was it painless, but it worked better than the usual injections. For anyone afraid of needles or injections, I can’t say enough good things about this system.

I didn’t even flinch when he did the freezing with The Wand…it was barely noticeable! Just like many have indicated here, the Wand is truly something every dentist needs. Sure, some dentists feel it’s not necessary, but the regular syringes are scary!

The wand is truly awesome – it has totally changed my attitude towards visiting the dentists… I was going to have IV sedation but have now decided I’ll be ok with just the wand!

Fortunately, I found a dentist who caters to needle-phobics. He uses the wand, as well as “syringes” that don’t look like needles. I knew a shot was coming, but because I didn’t see it, I didn’t panic. It was brilliant, and the most painless injection I’ve ever had.

The wand is a gift from god.

How can I find a dentist who uses the Wand?

In the UK, you can find out which dentists in your area offer the Wand or STA system through the UK distributor, Dental Sky. They can be contacted by phone on 0800 294 4700 or by email at [email protected] Alternatively, try this search function.

If you’d like to talk about the Wand or anything else related to dental fears, visit our support forum!